In modern usage, the noun “lycanthropy” (Greek lykos, “wolf”; anthropos, “man”) refers to both “a kind of insanity” in which a patient assumes the “instincts and propensities of a wolf” [OED 1] and, less commonly, the supernatural physical transformation [A1] of humans into wolves [OED 2]. One who suffers from lycanthropy is thus called a lycanthrope; however, neither of these terms appeared in medieval usage. Consequently, the more relevant term for a medieval discussion of lycanthropy is “werewolf.”

In Middle English, “werewolf” (“werwolf,” “warwolf,” etc.) refers to both a person who has been transformed or is capable of transforming into a wolf as well as “an exceptionally large and ferocious wolf” [OED 1]. The etymology of the term is somewhat unclear, although “were” has often been identified with the Old English wer, “man.”

Stories of werewolves and other instances of therianthropy (the metamorphosis of humans into animals) are extremely common in mythologies from all over the world and throughout history. For brevity’s sake and in order to facilitate a focus on lycanthropy in a disability studies context, this article primarily focuses on French and English texts from the twelfth century, as werewolf texts are particularly abundant in this historical moment. However, this is by no means an exhaustive study of lycanthropy in the medieval period.

Although werewolves have seemingly existed in stories in nearly every civilization, Caroline Walker Bynum marks the twelfth century as a moment of particular “werewolf renaissance” (94), as many significant changes in economy, society, and culture were happening as this time, with “colonial wars and missionary activities that brought European Christians into contact with radically different mores” (26). As Lisa Lampert-Weissig writes, these werewolves “differ markedly from Greek and Roman depictions of vicious, cruel, bestial figures. They are, in contrast, sympathetic–humans trapped in animals’ bodies” (Lampert-Weissig 41-2). Lampert-Weissig also notes that much of this seeming “explosion” of werewolf literature trends with Norman expansion (92), as both French writings on the figure of the werewolf are spread to the British Isles and England further attempts to differentiate themselves from their British neighbors.

The reasons for which a person (usually a man) becomes a werewolf in the medieval period vary. Sometimes an individual or group is punished with lycanthropy, although the reasons are not always known. Women are typically only transformed into werewolves in concert with their husbands, as in Gerald of Wales’ account. This trope of lycanthropy as punishment is in keeping with the classical model of Lycaon, who in Ovid’s Metamorphosis is transformed into a werewolf as a punishment for his inhospitality. More commonly, however, no reason is given for an individual’s lycanthropy in medieval texts. Furthermore, the contemporary popular treatment of lycanthropy as a contagious disease–the idea that a werewolf can turn others into werewolves by biting them–does not appear in the medieval period.

The details of the physical metamorphosis from man to werewolf are never described in medieval texts, and the transformation happens privately, away from other humans. Occasionally, as in Marie de France’s twelfth century lais, Bisclavret, clothing or the absence of clothing is crucial to the change from man to wolf and vice-versa. Bisclavret sheds his clothes to transform into a wolf and can only transform back by putting on the same clothes.

In an influential article, Mitchell and Snyder argue that “a narrative issues to resolve or correct . . . a deviance marked as improper to a social context,” which deviance the authors read as disability (279). Thus, literary narratives have a “perpetual discursive dependency” upon disability, a phenomenon the authors term “narrative prosthesis” (274).

By concerning themselves with the rehabilitation (in the guise of a return to human form) of a deviant body, medieval werewolf tales also operate within this model. Frequently, these tales concern an individual who has become “stuck” as a werewolf and seeks to be able to return to human form, a narrative drive that also serves a moral purpose. Many critics have argued that the werewolf in lycanthropy tales becomes a visualization of the otherwise invisible potential for human dysfunction or disability (what we might call “the beast within”). This is complicated, however, by the fact that the werewolf narrative also “asks us to look anew at that condition and discover the man that lurks within the beast, to wit, the potential for graceful ingenuity in adversity manifested by the werewolf” (Hanning 103). Werewolves both reinforce the boundaries between human and non-human bodies and break those boundaries down. Perhaps because of this, werewolf tales are often as much about the response of other to the werewolf as they are about the werewolf himself. In Bisclavret, for example, it is Bisclavret’s wife who is ultimately punished for her failure to accept her husband’s unusual body.

The Religious Model of Disability:

This mode of religious disability can also be used to define racial/national superiority through religious disability. In his 12th century writing The History and Topography of Ireland, Gerald of Wales explores the instances of werewolves in the country (some that he even encounters himself). Amongst sections entitled “The Irish are ignorant of the rudiments of the faith” and “The great numbers among this people that are maimed in the body,” Gerald describes an instance in which a priest encounters a wolf, who then explains his curse from a certain saint for all residents of his Irish village and that a couple (man and woman) must survive seven years in that form before they can be returned to their “natural state” (2.52). What makes moments like this most notable though, as Jeffrey Cohen notes in his book Hybridity, Identity, and Monstrosity in Medieval Britain, is that “their lycanthropy only makes visible in their bodies what they already are, and perhaps that is why we never learn why the villagers should earned a saint’s curse” (87).

Marginal Drawing of the Talking Wolf from a version of Topography and History of Ireland, http://www.bl.uk/onlinegallery/onlineex/illmanus/roymanucoll/m/largeimage77303.html

Additional marginal drawing of the Talking Wolf, as seen in Penguin Classic edition 1951 Topography and History of Ireland (see below). 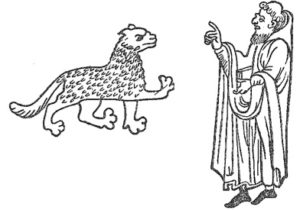 Pluskowski, Aleksander. Wolves and the Wilderness in the Middle Ages. Boydell Press, 2006.

The Romance of William of Palerne. <http://books.google.com/books?id=tVIJAAAAQAAJ&printsec=frontcover#v=onepage&q&f=false>