In present day English, the word “limb” maintains its principle meaning of bodily extremities from human, animal, or non-human subjects, such as trees. The Oxford English Dictionary lists the earliest use of “limb” – sense 2, as “A part or member of an animal body distinct from the head or the trunk” – from the Blickling Homilies, c. 971: “Þa clænan leomu þære halgan fæmnan.”

Old English
As in the Blicking Homilies reference above, the Old English (OE) lim reflects extended body parts such as arms, legs, fingers, toes, and the head as well as tree branches. Latin glosses in OE sources use membra. From the Bosworth-Toller Old English Dictionary:

Related terms
Latin: The Latin terms membra and limbus gloss the Middle English lim and limbe respectively.
Old Norse: The Old Norse (ON) limr conveyed both human limbs (for instance in the common ON idiom halda lífi ok limum, “to have life and limb”) and joints of meat.
Old/Early Scots: The Old Scots lim or lym refers to organs or parts of the human or animal body as well as a joint of meat. For instance, The Brus reads, “Bot off lymmys he wes weill maid, / With banys gret & schuldrys braid” (l. 385).
German: Glied, “member,” “joint,” “limb,” “link,” “penis”
Old Frisian: lith, “limb”
Gothic: liþus, “limb”

For many medieval Christians, the symbolic weight of the limb was bound up in the Christological division of the body. Christ acted as the head of the Christian community’s body, while all good Christians made up the members, or limbs, of the body. Perhaps most influentially, the First Epistle of St. Paul to the Corinthians outlines the membered body analogy as it relates to the body of the Church.[1] St. Paul analogizes a community of faith through the image of the body:

This ubiquitous image of the Christian body of members was taken up anew by John of Salisbury in his Policraticus, a work that translated this Christological physiognomy into legal theory. The Policraticus articulated what became known as the medieval “body politic,” where the king acted as the head rather than Christ, and the laborers were the limbs of the body. An imagined “wholeness” of a community made up from distinct parts dominated much of medieval Christian ideology. Caroline Walker Bynum’s work on fragmentation has shown that twelfth- and thirteenth-century theological debates center on the eucharist and transubstantiation, the relationship between body and soul, and new regulations on miracles, relics, and the mediation of the body. This religious landscape transformed ideas about the partition of the body, which, as Bynum puts it, whether through “reunion of parts into a whole or through assertion of part as part to be the whole – was the image of paradise.”[4]

Limbs were also featured in medical treatises such as Guy de Chauliac’s Chirurgia magna, c. 14th century. Typically, medieval medical language would use the term membre rather than lim, as in the heading to the second part of the Chirurgia magna, which reads “And begynneth the seconde ptycle / where as is moued & assysed certayne questions and difficultees vpon the Anathomy of the membres composed.” Similarly, in John of Arderne’s Tretis of fistula in ano, the second tract discusses fistula in the limbs, but rather than using the term lim, Arderne’s Tretis divides the limbs into parts. For instance, Tretis 2.8 is headed “Of fistul in þe lawe ioyntour of þe fyngers, and in þe legges, knees, fete, & ankles, wiþ corruptyng of þe bones, and þe hardnes of þe cure.” Here Arderne counts all the lower limbs under the title “lawe ioyntour” – the lower joints of the body.

The limb had a peculiar function in material, textual culture as well. Scribes also used manicula, (Latin: “little hand”) to point to important aspects of a text. These were small floating hands and fingers, sometimes attached to an entire body (either human, animal, or otherwise), that were used as teaching tools. Essentially, medieval sticky notes. 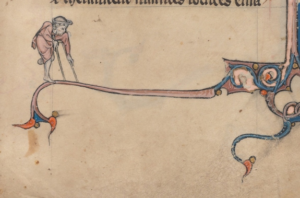 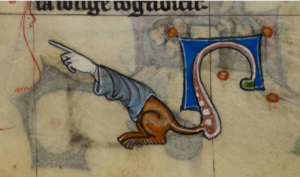 Jović, Nebojša J. and Marios Theologou, “The Miracle of the Black Leg: Eastern Neglect of Western Addition to the Hagiography of Saints Cosmas and Damian,” Acta Med Hist Adriat 13.2 (2015): 329-344.

One Leg in the Grave Revisited: The Miracle of the Transplantation of the Black Leg by the Saints Cosmas and Damian. ed. Kees Zimmerman. (Groningen: Barkhuis, 2013).