In Middle English, the noun “hermaphrodite” (“hermafrodite”) designated a range of non-normative gender types and transition processes, from a creature exhibiting both masculine and feminine physical or behavioral characteristics including homoerotic attraction, to persons that change from one gender identity to another via physical or behavioral alteration.

In Latin and Greek, the noun “hermaphrodite” was based on the Greek figure “Hermaproditus,” the most ready account of which is found in Ovid’s Metamorphosis. The child’s birth and name derives from “Hermes”, the God of Transitions and Boundaries, his name a variation on “Herma” which means a boundary marker (Oxford English Dictionary); and Aphrodite, the God of Beauty, Desire, and Women, whose name has contestable origins, but many scholars believe that “Aphro” most directly translates as “sea-foam” and “Dite” to translate as “seeming” or “appearing” (Oxford English Dictionary). According to Ovid, Heramphroditus was born as a man, but fuses with a female water nymph in an enchanted pound, resulting in a mixing of genders.

Hermaphrodite in the medieval period referred to a much wider diversity of non-normative gender expression, embodiments, and sexualities than today. Because the mid to late medieval medical understanding of gender was based on Aristotle and Galen’s definition of a single sex (man) which developed from the heating of the body in the womb until the internal organs inverted and became external, women and hermaphrodites (i.e. transgender or intersex in today’s distinctions) would be classified as exhibiting an incomplete sexual development.

Translations of Plato’s Symposium offer the Hermaphrodite as the pre-lapsarian heterosexual human, a combined man-woman that were split by the gods and thus causing a race of women-oriented men and men-oriented women in search for their “other half.” For various reasons, including the latency of translations of Plato into England, the understanding of the Hermaphrodite as inherently heterosexual is not common in medieval or early modern references.

The most referenced source for Hermaphrodite is to written and visual accounts of Ovid’s narrative of Hermaphroditus in the Metamorphoses. As a result, the figure of the hermaphrodite signifies not only persons with mixed physical markers of gender (genitalia, hair, breasts, etc), but those that exhibit mixed behavior markers of gender (including possible signs of homosexuality) as well as those that transition from one gender to another either by physical transformation or by adopting alternative clothing, names, social and professional habits.

The term “hermaphrodite” is first readily found in Plato’s Symposium on Love (385-380). Subsequently, a more complete explaination of the term becomes available through Ovids’s Metamorphoses (8 BCE), and tells the story of how the nymph Salamicis attempts to seduce Hermaphroditus, the son of Hermes and Aphrodite. When Hermaphroditus rebuffs her, Salamicis appeals to the gods to join them forever. The result of her petition is “a hybrid creature of both male and female anatomical parts; hence the word hermaphrodite came to denote a person of doubled or intermediate sex.”1 John of Salisbury, in his 1159 Policraticus, likens “He who engages in the trifles of the courtier and undertakes the obligations of the philosopher or the good man is an hermaphrodite,” using the term to criticize court life.2 John Gower recalls the story of Hermaphroditus in the Confessio Amantis, but John Trevisa’s 1398 translation of Bartholomew Anglicus’s De Proprietatibus Rerum seems to be the first use of the word itself in Middle English, which reads “In harmofroditus is founde bothe sexus male and female: but alway vnperfyte” (xviii.811).3 Alain de Lille’s 12th century De Planctu Naturae also invokes hermaphrodites to argue against “grammatical and sexual deviance.”4 Both theological and legal texts attempted to place the hermaphrodite within existing binary biological or social categories. Islamic jurists, for example, would assign a gender role to a hermaphrodite, referred to as a khuntha mushkil, for the purposes of marriage, ritual, or inheritance.5 In Latin canon and civil law, hermaphrodites could participate in legal proceedings as long as they were found to be “sufficiently masculine” in order for their “juridicial status to be labeled male.”6 A notable use of the term in theological texts appears in Peter Cantor’s 12th century De Vitio Sodomitico, where he warns that hermaphrodites should use only one set of their sex organs to avoid being accused of sodomy. Sir Edward Coke’s 1628 The first part of the institutes of the lawes of England states that “An hermaphrodite may purchase according to that sexe which prevaileth.”7 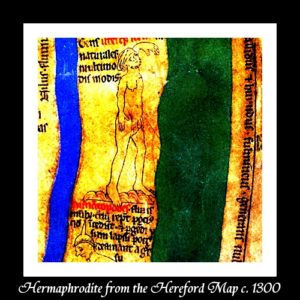