(Greek: gigas gigant-) Giants have large bodies, much bigger than human bodies, but proportionate. Proportion distinguishes them from other monstrous types, whose hypertrophy is related to missing organs (for example, the Cyclops has a single hypertrophic eye, precisely because he does not have two). The absence of a fair proportion or size is a clear allusion to moral excess, associated with hubris as a characteristic feature of anthropomorphic giants. Giants are hideous, since evil always goes hand in hand with the idea of ugliness, according to the Platonic binomial pulchrum/bonum. They have thick hair, a bristly beard, and, in Classical Antiquity, serpents instead of legs, a feature that disappears by the Middle Ages. Giants’ excessive size, ugliness and deformity afford them a place beside other monstrous beings.

Literary gigantism, and the resulting representations in plastic arts, was also applied to some animals and plants from faraway lands.

Gigantism as a congenital disorder is caused by excessive growth of the pituitary gland, and has spurred the imagination of many different monsters.

In his Theogony, Hesiod mentions the birth of these beings from Uranus’ blood and Gaia (Hes., Theog., 183 ff.), but the first work that depicts the battle of giants against gods  is Apollodorus’ Bibliotheca (Apo, Bib., I, 6, 1 ff.). Later on, it also appears in an incomplete poem by Claudius Aelianus called Gigantomachy (only 128 verses have reached us) and in Ovid’s Metamorphoses (Ovi, Met., I, 151-162), and it has been widely represented in plastic arts. Isidore of Seville begins by describing giants individually, but then considers them as a whole, that is to say, as forming part of a monstrous race (Isidore of Seville, Etym., xi, 12, 13, 14).

Giants are included among the archetypical monsters that heroes have to fight in their journey. In the Middle Ages, giants became tyrants, castle owners and abductors of maidens. Their teratological features are their larger than usual size, extraordinary strength and extreme hubris, which often leads to their hapless end, since even if the hero is comparatively inferior in physical terms, he is, instead, superior in spiritual terms, and this is the reason why he eventually beats the giant.

The Old Testament mentions the Nephilim race, a Hebrew-derived lexem that was translated at different points as ‘giants’, although on some occasions the Hebrew term was retained. The biblical race of the Nephilim or giants could be related with the most instinctive aspects of human nature. Also, they are etymologically associated with ‘the fallen’, since in biblical Apocrypha giants fought the Archangels. According to the tradition, the last surviving giants disappeared in the Deluge. In the Book of Genesis, Noah’s story reads as follows: “gigantes autem erant super terram in diebus illis postquam enim ingressi sunt filii Dei ad filias hominum illaeque genuerunt isti sunt potentes a saeculo viri famosi” (Gen. 6: 4). Exegetes have seen in this verse an allusion to the folklore tradition that described the birth of giants as the result of the union of gods and mortals. However, the best-remembered event involving giants is the confrontation between David and Goliath (I Sam. 16-17). Additionally, in the medieval tradition Saint Christopher is represented either as a giant or as a cynocephalus, while his relics (a tower-high fang, a man’s fist-sized molar tooth) are consistent with a huge size (da Varagine, The Golden Legend, and Torquemada, Garden of Peculiar Flowers, 118).

Regarding gigantism as a congenital disorder, we find “giants” well into the 20th century in circus performances, together with other “monstrous” subjects, such as bearded women, dwarves, Siamese twins, etc. Robert Wadlow (1918-1940), known as the Alton Giant or the Giant of Illinois, has gone down in history as the world’s tallest man (his height was 8 ft 11.1 in and his weight, 490 lb), as a result of hyperplasia of his pituitary gland. 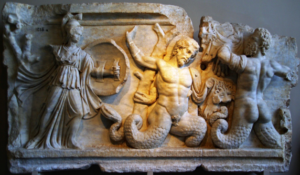 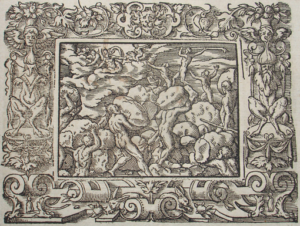 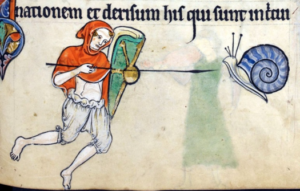 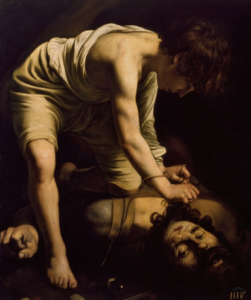 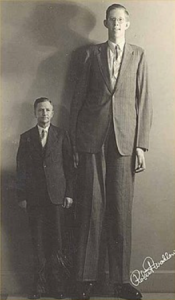 Fig. 5: Robert Wadlow, the world’s tallest man, in a photographic postcard with his father. 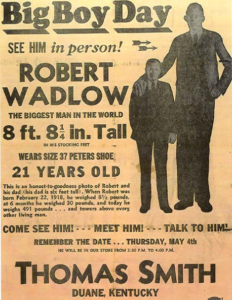 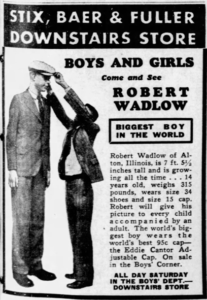 Figs. 6 and 7: advertisements of shows with Wadlow as the main attraction.